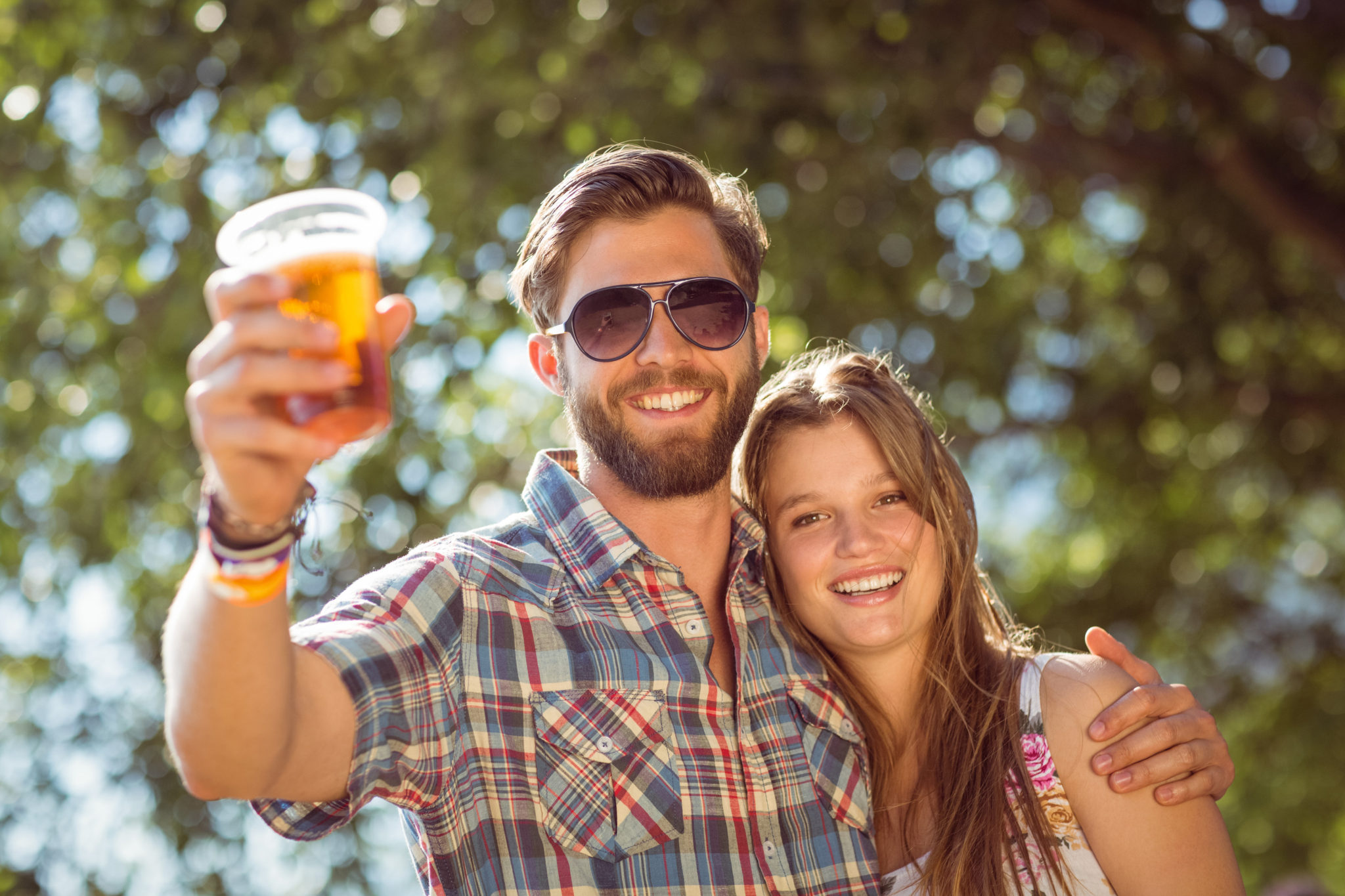 With a half-dozen microbreweries producing insanely good craft beers—Eye of the Lager, anyone?—Yolo County is becoming one of California’s capitals of beer touring

Yackzan is sipping one of his beers at his Sudwerk Brewing Company in Davis. And it only takes one sip of Sudwerk’s Cascaderade IPA or Big DIPL to realize that he is right. Beer is an emotional beverage, and the emotions it stirs most strongly are happy ones. Joy, exhilaration, delight —it would take a million emoji’s to fully express the pleasure you feel when drinking a really good glass of beer.

There’s no better place to experience all the pleasures beer brings than in Yolo County. Over the last few years, Yolo has nurtured small breweries that produce some of the best craft beers in California—a half-dozen hospitable spots where you’re guaranteed to taste great beer and have a good time.

DAVIS’ SUDWERK: WHERE IT ALL BEGAN

The birthplace of Yolo County craft beers is Sudwerk, about a mile east of downtown Davis. It was here, in the late 1980s, that two local beer fans, Ron Broward and Dean Unger, pursued their dream of brewing German-style lagers following the five-century-old rules of Reinheitsgebot—the purity law that limited beer ingredients to malted grains, hops, water and yeast. They did it so well Sudwerk became one of the leading breweries of the era.

Flash forward to 2016. Now Sudwerk is owned by two Cal Poly grads, Ryan Fry and Trent Yackzan—with Trent being the grandson of founder Dean Unger. “I used to come here all the time as a kid,” Yackzan says. “The aroma of the brewery brings me back to my childhood.”

But the new Sudwerk is being a lot more adventurous with its beers than the old. “Redefining the American Lager” announcing the awning out front of the brewery. That’s exactly what Fry and Yackzan are doing in the new facility they’ve christened The Dock—the former loading dock where they’re brewing up strikingly inventive beers. (The adjacent Sudwek Restaurant, which had been under different management, recently closed.)

“We just started experimenting with crazy recipes,” says Yackzan. That’s how they came up with Big DIPL, brewed with rare, aromatic galaxy hops from New Zealand. And with the Rye of the Lager, spiced with German rye. (Feel free to sing the Survivor song as you drink the lager.) And with Fünke Hop Farm, an American wild ale aged in petite syrah wine barrels. They’ve also produced an updated version of the Helles Lager, the original German-style brew Sudwerk was known for—but now made with Pacific Northwest hops and dubbed California Dry Hop Lager. It’s become one of their biggest sellers.

Visitors can taste the beers, traditional and cutting edge, in Sudwerk’s umbrella-shaded patio. Brewery tours are offered, too.  “We’re becoming a real community hub,” says Yackzan. “A lot of locals hang out here. It’s so great to have people coming here to try a beer they’ve never tried before.”

Sudwerk may be the first, but it’s not the only microbrewery in Davis: Three Mile Brewing Co. pours traditional German Hefeweizen and Belgian Saison (among other beers) in its taproom on G Street.

“Yolo County,” says Mike Costello0 “really is different. It’s like YOLO—You Only Live Once. Our customers go out and rock climb, they bike, they river raft, they’re into stuff. So naturally they want to drink great beers.” 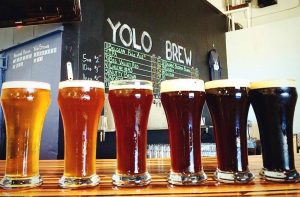 Mike Costello is producing those beers in his two-year old Yolo Brewing Company, located in West Sacramento—which has become, maybe a little surprisingly, one of the hottest brewing centers in Northern California, with three breweries within a few blocks of each other. “West Sacramento,” Costello says, “is great.”

Costello acquired his brewing skills at UC Davis’ world-class program—“I told my parents, I’m 19, not legal age to drink but I want to make alcohol for a living.” And the beers on tap and for sale at Yolo Brewing display both his decades of expertise and his sense of exploration. Among them is Orange Blossom Blond, made with California honey—“it has the aroma of a Sacramento Valley orange grove,” says Costello. There’s also the malty, toffee-tinged Nutty Brown and The Cousins, a porter spiced with cacao, cinnamon, and four chilies.

“People’s beer tastes have been changing dramatically in the last five to ten years,” says Costello. “It’s like a rainbow. It used to be there were seven colors in the rainbow. Now the rainbow is four-dimensional with things blowing up in it. It’s just amazing.”

All the beers are served in a spacious setting where you sit at long tables and sip your beer and sup on the food sold by the food trucks outside. Costello also invites bands to play a few nights a week. And if all your beer tasting makes you aspire to beer-making, you’re in luck: Yolo Brewing’s Personal Brewing program will steer you through the process of making your own IPA, Porter or Pilsner. 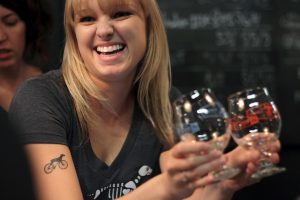 and beer.  You don’t have to show up at Bike Dog on a $3000 Cannondale accompanied by your golden retriever—but some people do. However you show up, you’ll be pleased by the range of craft beers, from Ride Bikes Blonde to Klunker Red Ale not to mention their extremely cool Bike Dog t-shirts.

The third West Sac brewery is Jackrabbit Brewing Co. With its sleek, exposed-wood interior décor, it’s possibly the most stylish of the bunch, and its beers are likewise appealing and sophisticated: malty, chocolately Greybeard Old Ale; the unusual Vineyard Dubbel, made with 80 pounds of unsulfited cabernet grapes added after fermentation.

The final West Sacramento beer stop is not a stop but a movable feast. About once a month, the Sacramento River Train turns into the Sacramento Beer Train, where you sample beers from local breweries while taking a 3-hour train ride from West Sac to Woodland and back. The scenery—farm fields, the Sacramento River—is pretty, the on-board food good, and the live music is so hot you’ll want to risk dancing on the moving train car. And the beers, of course, are great. What more could you want? 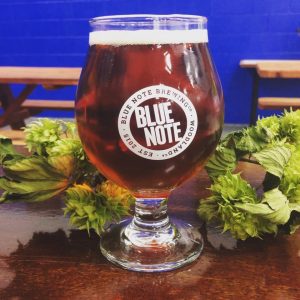 Woodland is now home to two excellent craft breweries. Located in downtown’s memorably named Dead Cat Alley (which sounds scary but is not), and housed in the former press room of the Daily Democrat newspaper (look close and you can still see ink on the concrete floors), Blue Note Brewing Company has earned deserved fame for its stouts, porters, IPAs and seasonal beers—and for its proud claim that it’s not merely a microbrewery but an artisan Nano-brewery,  where every beer is hand-crafted. Want to earn your own fame as a devoted friend? Pre-buy a beer for one of your pals and get both your names up on Blue Note’s Buy A Friend A Beer board. 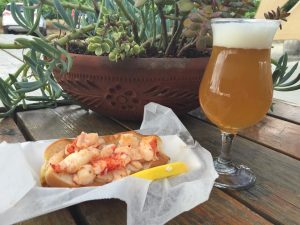 Now for one last Yolo County beer stop, this time in Winters. Stop into Berryessa Brewing Company on any weekend afternoon and you’ll likely see throngs of people lining up to grab glasses of brewmaster Chris Miller’s House IPA and Propaganda Pils to take to the picnic tables out front. There’s usually a food truck in the immediate vicinity. There’s usually a really good band. There’s usually a nice breeze to balance out the warm sun. And, of course, there are the beers. Is that a recipe for a perfect afternoon? You bet.

A SELF GUIDED TOUR TO BEER TASTING IN YOLO 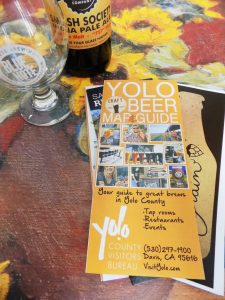 “The craft beer scene has been exploding nationwide, and that includes our own region,” says Tiffany Dozier, PR & Communications Director of Visit Yolo. “With pioneers like Sudwerk Brewing in Davis and innovators like Blue Note Brewing in Woodland, Berryessa Brewing in Winters, and Yolo Brewing in West Sacramento, it’s clearly time to publish a guide to all the best beer places in Yolo County.”

The 12 restaurants listed are notable for their wide selection of local brews on tap and in bottles. The events include Davis Beer Week and the Yolo Micro Brew Festival; there’s also a nod to the Sacramento River Train’s enjoyable Beer Train excursions. Request your free copy of the Yolo Craft Beer Map & Guide today.

Check out our guide to Yolo breweries

Peter Fish is a freelance writer based in San Francisco. He worked as a senior travel editor for Sunset Magazine for many years; his more recent work has included contributions to San Francisco Chronicle special travel sections.