This is Yolo: Hooby's Brewing

This is Yolo: Hooby’s Brewing 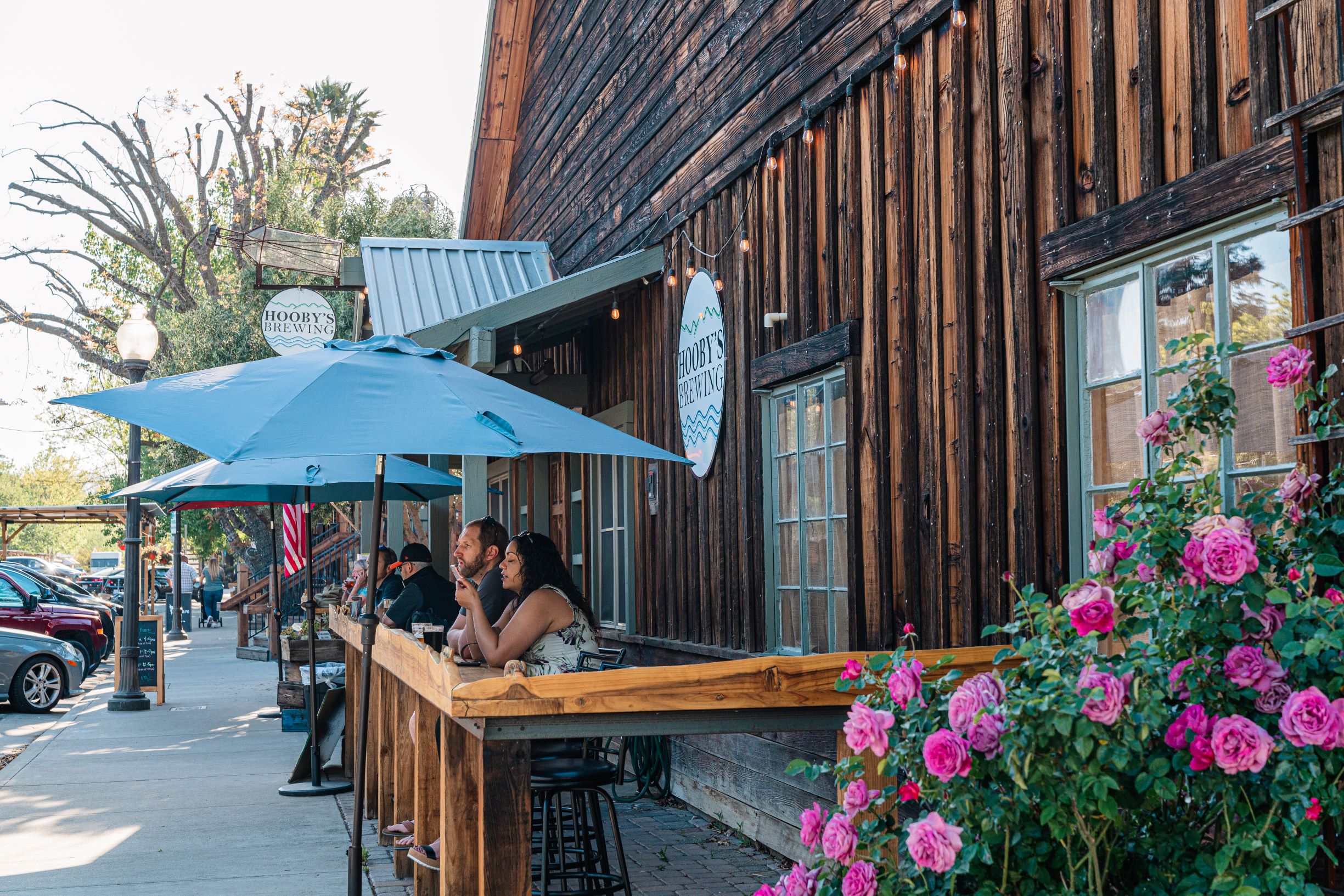 Hooby’s Brewing is an inside joke that became a reality, and twin sisters Courtney and Jaclyn Stocking are still laughing. The Stocking Sisters started Hooby’s with the help of mom and dad, Susie and Curtis, and older siblings Melanie and Chad. Mom and dad provided the property, while Chad perfected the brewing. After years of joking about starting a brewery, the twins brought Hooby’s into existence. Courtney is quick to add that there was a lot of paperwork, market research and labor that went into it, too!

Today, six Stocking family members run Hooby’s, known for its hands-on owners, inventive brews and waffles – yes, waffles, in all their many forms. And that’s not all their known for being inventive for – the fun name “Hooby’s” comes from Hoobyar Lane, where the property is located, and Mr. and Mrs. Hoobyar, who mom and dad bought the property from 30 years ago.

At that time 30 years ago, Hooby’s was a small gas station and convenience store called “Pardehsa Market” that served last-minute needs for people on their way to Lake Solano along Highway 128. There were also orchards on the property, growing walnuts, apples, plums, apricots and lots more!

Courtney and Jaclyn grew up helping out at the gas station/convenience store, starting out early on their entrepreneurial path. As they grew older, the sisters made trips to local breweries to relax, play games and just enjoy life. They always talked about how great it would be to open up their own brewery – Hooby’s; a name they gave the location even back then.

FROM DREAM TO REALITY

After years of encouragement from family, friends and the local community, the Stocking sisters put their ideas down on paper and started making things happen. Soon family, friends, and locals alike began asking when Hooby’s would open and the response was always “April 1st”, being sure to never give a year.

Hooby’s organically began with family texts (aka “impromptu meetings”) where a member of the family would say “at Hooby’s” and that meant they were hanging out at the old Pardehsa. Market at one of the picnic tables with a 12-pack of beer.

Over six years, Courtney and Jaclyn worked on cleaning up the old Pardehsa Market and continued their hardwork and preparations to open Hooby’s. 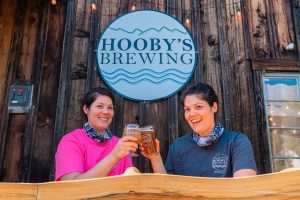 Hooby’s Brewery is most known for their inventive brews and creative names. “This Damn Hazy NE IPA” is the breweries most popular, with its citrus notes, and is also Courtney’s favorite. Jaclyn on the other hand loves the “Sunday Session IPA”, named after breakfast “sessions” and gossip hours the sisters enjoyed at Grandma’s.

Although running a brewery was never in the sisters’ (or families’) plans, it was a blessing in disguise. “Our family enjoys meeting new people, making new friends and providing an environment where people can do exactly what we did – connect  with their family and friends and kind of forget about what else is going on for a little while,” explains Courtney.

WHAT’S ON THE MENU

Courtney and Jaclyn started serving waffles to try something new, and to their surprise,  the waffles soon became a customer favorite. In fact, Courtney recommends the “Pesto Grilled Cheese Waffle, add chicken” to make it a waffle sandwich, and Jaclyn recommends the “Waffle Churro made with [our] housemade dulce de leche, cinnamon and sugar. Be sure to add ice cream!”

Did we mention that they make all their sauces in house? A favorite is the pesto aioli. Pair them with the buttery goodness of the waffle and you have a match made in Hooby heaven.

Courtney and Jaclyn admit that customers were skeptical of the menu item at first, but now, they get many return visitors who come just for the waffles! 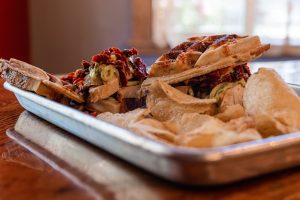 You’ll find the Hooby’s full menuwith appetizers, salads and sandwiches (served on waffles if you prefer) through this link: https://www.hoobysbrew.com/take-out-menu.

Hooby’s is also now offering merchandise so you can show off your pride. From shirts and sweatshirts, to baseball hats and beanies, shop now, here: https://www.hoobysbrew.com/merchandise.

Hooby’s Brewing runs a Farmers Market with Fireclay Farm on a week to week basis, but usually takes place Saturdays from 3pm – 5pm.

Hooby’s offers live music and cornhole! Check their website for updates on live music. They host their cornhole league on Thursdays with open single day tournaments on Fridays. Kids are always welcome, as are pets on the patio with a leash.

Looking for a full day itinerary in Yolo County? The Stocking sisters recommend starting out early with coffee at Steady Eddy’s and then heading up to the lake for a 3- or 5-mile hike. “It is absolutely beautiful to make it to the top and to look out over Lake Berryessa, especially for a sunrise,” says Courtney. Then you’ll want to head back to downtown and have a cold brew at Hooby’s, a Winters foodclassic. See you there!

The twins hope to open a second location soon on a 40-acre farm where they also plan to have animals, music and a large beer garden.

Stay tuned for more udpates from the Stocking Family!